You’re right—different animals can hear different types of sounds. To find out more about it, I talked to my friend Dr. Vishal Murthy, a veterinarian at Washington State University.

Murthy reminded me sound comes from vibrations that travel through the air. For instance, when you feed your pet, the kibbles that fall into the bowl send out vibrations to your pet’s ears.

Some animals, like cats, dogs, elephants and humans, have ears that stick out and can help funnel these vibrations into the inner ear.

But some animals don’t have outer ears—dolphins, for instance. Dolphins have some of the sharpest hearing of all the animals on our planet. Scientists think dolphins rely on a part of their jawbone to help send those vibrations to their inner ears.

In animals, the vibrations travel to a part of the inner ear called the cochlea, which looks like a snail’s shell. It has tiny parts called hair cells, which look like a little series of hairs in a line, that help animals sense a certain range of sound.

Some of the animal’s hair cells can pick up on lower frequencies while others pick up on higher frequencies. Murthy said the longer an animal’s cochlea, the more likely it is we will find a variety of hair-cell types. This wide variety is one factor that can give the animal a wider range of hearing abilities.

If you are like me, you might be wondering why some animals can hear certain frequencies, while other animals cannot.

Murthy said part of the answer to your question also has to do with the way hearing helps animals adapt and survive. Elephants are one great example. Elephants can hear lower frequencies than a lot of other animals can. It turns out low frequencies can travel farther than high frequencies. 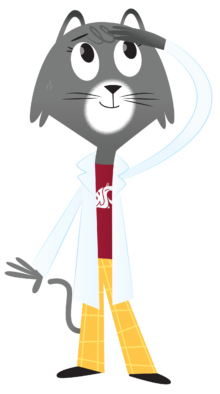 “Elephants are migratory and travel long distances, so they need to be able to hear over longer distances,” Murthy said. “Elephants have evolved this ability, so they can communicate with each other.”

He also told me elephants will sometimes pick up on vibrations using their feet. The vibrations travel through their bones and to their ears where they can be turned into sound.

Meanwhile, cats can hear a lot of high-frequency sounds. Prey animals, like mice, often make higher frequency sounds, like a squeak. The ability to hear particular frequencies can help some animals find prey. Murthy also mentioned most cats have better hearing than dogs, especially when it comes to high-pitched sounds.

You heard it here, young scientists. From tiny hair cells to the structure and shape of the ear, there are a lot of factors that go into helping animals hear different types of sounds.