It’s easy to love bees. They’re furry and buzzy. Along with other insects, birds and bats, they pollinate about one-third of the plants we eat.

I talked about how long bees have been buzzing around Earth with my friend Silas Bossert. He’s an evolutionary biologist in the Department of Entomology at Washington State University.

“The oldest bee fossil that is really without doubt a bee is between 65 and 70 million years old,” Bossert said.

That bee fossil was found in preserved tree resin called amber. Bossert told me amber fossils are the best bee fossils because they can preserve the whole bee. But there are other kinds of fossils, too. 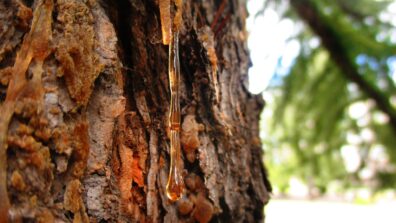 Compression fossils are imprints left after something is pressed between layers of sediment. This could be the impression of an insect wing. Scientists can use the pattern of veins in a wing imprint to tell if it was made by a bee.

Trace fossils are things an animal left behind. Footprints and fossilized poop are trace fossils. So are chew marks left in preserved leaves. The fossil record includes leaves with chew marks that look just like the holes leafcutter bees make. That’s a clue that similar bees were around back then.

Evolutionary biologists also look at DNA evidence. They can compare bee DNA from different times and kinds of bees to build a map that shows how bee families are related to each other. It also shows that bees are related to wasps. Bees and wasps share an ancestor—a meat-eating wasp that lived about 130 million years ago.

“Based on this genetic evidence, we think that bees are probably around 120 million years old,” Bossert said.

That fits with what we know about flowering plants. Plants probably evolved flowers shortly before bees showed up. Then flowers took off once the bees were there to pollinate them.

We don’t know exactly how that wasp ancestor gave rise to bees, but here’s one idea. Ancient wasps probably built nests like wasps do today. They probably packed the nests with food their babies could eat when they hatched—likely some kind of insect since most baby wasps eat meat. It’s possible some wasps began leaving little bits of pollen in the nest, too. Pollen is full of protein, so it could have been added to bulk up the food the mother placed in the nest. Or it could have been an accident. Maybe the pollen got stuck to her body hairs and then fell off in the nest. Eventually a wasp left only pollen for her babies—like bees do today. That wasp was the first bee. 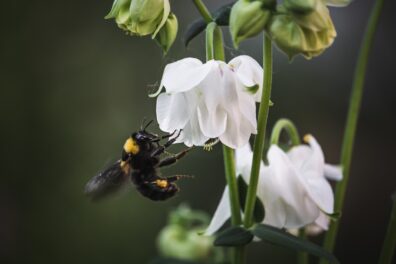 Right now, scientists are worried about native bees. These are bees that have always lived here—like bumblebees and squash bees. They’re at risk when their habitats or the plants they eat are lost.

There are things we can do to help native bees. Bossert suggests planting native flowers. Bee lawns help, too. These mix flowers like clover in with grass to provide food for bees. Many bees nest underground in dirt or in cavities like hollow stems. Think like a bee! Protect places that seem like good nesting spots.

There are more than 20,000 species of bees today. Scientists find between 50 and 200 new bee species every year. Bossert has found and described six new bees himself—and has more he’s working on right now.

Finding new bees is exciting. It also helps us save native bees. After all, the more we know about our bee neighbors, the better we can protect them.