Starfish might have the coolest—and strangest—way of gobbling up a snack.

I learned all about it from my friend Cori Kane. She studied coral reefs when she was a biology Ph.D. student at Washington State University. Now she works for the National Oceanic and Atmospheric Administration. She writes policies to help protect the ocean and the animals that live there.

“Sea stars are probably one of the weirdest creatures. I don’t know any other organism that basically barfs out its stomach to eat,” Kane said.

Yes, you heard that right. She said sea stars barf out their stomachs.

“They have stomachs sort of similar to ours,” she said. “But instead of ingesting food through the mouth and going to the stomach, they basically spit out their stomach through their mouth. Then the stomach wraps around the food and digests the food outside of its body. Once all the food is digested, it pulls in the stomach and swallows it back into its body again.”

Wow. That’s a lot to digest.

You might have noticed that Kane calls starfish sea stars. That’s what scientists usually call them now—because they aren’t fish. They’re echinoderms. That means they have spiny skin and no backbone. 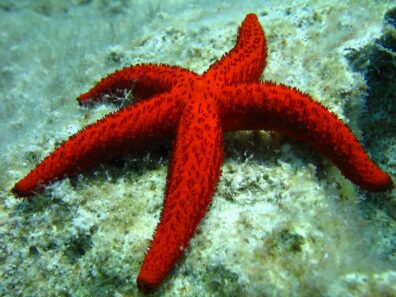 Sea stars eat mussels and clams and other things with hard shells. But they don’t have teeth to crush those shells. Instead, they combine tube feet with that stomach-barfing feeding mode.

Tube feet are like the suckers you see on an octopus arm. But they’re super tiny—about the size of a pin head. Sea stars have thousands of them under their bodies. They use them to walk and to crack apart those hard shells that protect their prey.

“They crawl over the little mussels and use their tube feet to pry open the mussel shell,” Kane said. “They basically stick their stomach into the nice gooey bits of the mussel and eat it. Then they take their stomach back in and move on to the next mussel.”

Kane told me that eating isn’t the only weird and amazing thing sea stars do. They can regrow their arms if they lose one. Sometimes an arm that breaks off can even grow into a whole new sea star. That’s possible because a sea star’s sensory organs are spread out down the middle of its arms instead of centralized in a brain like ours.

Most sea stars have five arms, but some have way more. The sunflower sea star can have 25 arms and grow to be more than three feet across.

It may seem like sea stars are very different from us. But just like us, they can get sick. Kane told me that a few years ago, sea stars up and down the West Coast of the U.S. became sick. Many of them died. Sea stars are top predators and play important roles in their ecosystems. Scientists are worried about their recovery. They even listed the sunflower sea star as critically endangered. That helps scientists like Kane work to conserve this giant sea star and other ocean animals that need protection.

We can all pitch in by making choices that help our oceans like using less plastic.