It makes us wonder if animals seek comfort and meaning the same ways humans do—like through religion. We truly don’t know the answer to your question. It’s something people have wondered about for a long time.

Exploring deep questions is the work of my friend Joe Campbell. He’s a philosopher at Washington State University.

We often think of religion as beliefs and behaviors. They relate to the supernatural—something beyond us and what we see in the natural world.

Campbell told me that underneath many religious beliefs and behaviors is a feeling: awe. It’s a proto-religious attitude. Proto means first.

So, do animals experience awe?

That probably depends on the animal and how it thinks. Campbell told me about three levels of thinking.

The first level is perception. Have you ever zoned out on a walk? Your body is still taking in information and responding. After all, you aren’t bonking into trees. But you aren’t actively thinking about it.

The second level is the awareness you have when you aren’t zoned out. You aren’t just avoiding trees on autopilot. You’re noticing them and thinking about them.

The third level is being aware that you’re aware. This is self-conscious awareness or meta-level thinking. That means you’re thinking about those trees and noticing your thoughts about them. Maybe you think how incredible it is that a tiny seed can grow huge and eventually give off the oxygen that’s filling your own lungs.

You might even feel awe or a deep connection to nature.

We know humans have self-conscious awareness because we can talk about it. It’s more difficult to figure out if other animals do, too.

The most famous chimpanzee expert in the world—Jane Goodall—says she’s sure chimpanzees feel awe and simply don’t have language to describe it. When chimps see thundering waterfalls, they seem to dance in wonder. 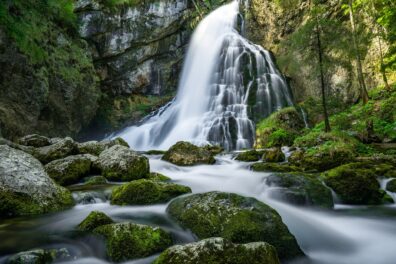 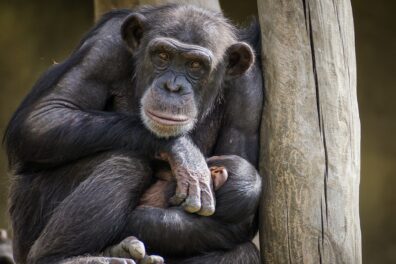 “That’s why these questions about whether animals are capable of meta-level thought are important,” Campbell said. “If they just have the behavior and aren’t capable of meta-level thought, then there’s no chance you should classify their behavior as religious. But it does seem like there are members of the animal kingdom like chimpanzees, elephants and dolphins that seem to be capable of self-conscious awareness. So, the answer could well be yes—at least for some members of the animal kingdom.”

Scientists use tests to try to figure out if an animal has self-conscious awareness. One is the mirror test. When it looks in a mirror, does an animal know the reflection is itself? Humans and the other great apes like chimpanzees and orangutans can do it. Some elephants, whales and dolphins can do it. A bird called a magpie can do it. There’s even some evidence that some ants can recognize themselves in a mirror.

Some scientists like neurophilosophers think understanding the brain is key to answering these deep questions. Their work—and questions like yours—may help us understand early humans and humans’ place in the universe. It might make us rethink how we relate to other animals.