Maybe you dream of pointing your telescope toward distant galaxies. Or zooming in on microscopic life on Earth. Being a scientist is an amazing job. You can also do science for fun—no matter your age or anything else about you. It belongs to everyone.

I talked about science training with my friend Kalli Stephens. She’s earning her bachelor’s degree in genetics and cell biology from Washington State University. WSU has a strong undergraduate research program. So, Stephens has been working as a scientist while going to school. 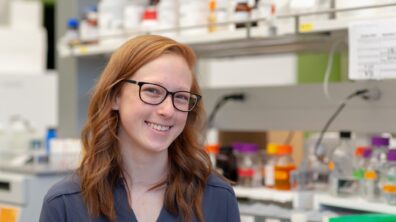 “I get to see the same experiments from a class setting and then a real scientific setting, which is really nice,” she said. “I think the younger we can get people into science, the better.”

Here’s a quick breakdown of one pathway to becoming a professional scientist. After high school, many people go to community college for two years. Then, they transfer to a university. Others go directly to a university. This is undergraduate education. The goal is to earn a bachelor’s degree. For science, that’s a Bachelor of Science, or B.S. That usually takes four years.

Colleges and universities are full of different people and ideas. So, it’s a great place to figure out what kind of science you love.

After that, some people go to graduate school. For science, they may earn a Master of Science degree, or M.S. This usually takes two years. Others earn a doctorate, or Ph.D., which usually takes four to six years.

Graduate school is often a mix of taking classes, teaching classes and doing your own research projects. After a doctorate, many people spend a few more years as a postdoctoral fellow. This helps them learn special skills before they set up their own lab.

Whew, that’s a long time! This cat loves school, so that sounds fun to me.

But it’s not the only path to being a scientist. There are science jobs you can do right out of high school. Or at any point along that pathway. Some science jobs need a two-year degree or a bachelor’s degree. Some need a master’s degree or doctorate.

Science jobs may be at universities or government agencies like NASA. They may be at national labs or nonprofit organizations. Scientists also work in industry, making medicine, food and other things that people use.

Some people take a break between degrees to work as a scientist. Stephens says students can also get experience by emailing scientists. They can ask to volunteer in their labs. That’s what she did.

“I was like, ‘I’m really interested in what you’re doing, but I don’t completely understand what you’re doing!’” she said. “They were excited that someone wanted to learn. If you can get past that nervousness, they’re willing to take you on and mentor you.”

Stephens spends about 10 hours per week in the lab. She’s been doing that since she started college. Now, she’s running her own project. That’s something that usually doesn’t happen until graduate school.

Plus, she’s written academic papers. That’s how scientists tell the scientific community about their work. She’s also gone to professional conferences. These are like sleep-away science fairs. They helped Stephens meet other scientists she could work with later.

If you love science, I have great news. There are tons of community science projects (sometimes called citizen science) you can do right now. These projects help scientists gather data to advance all kinds of science. I bet there’s a project that’s perfect for a young scientist like you!