From jellyfish to snakes to spiders, lots of animals use poison or venom. It helps them catch prey and defend themselves. Even the platypus and one very spicy primate called the slow loris use venom.

I talked about your question with my friend Blair Perry. He’s a biologist at Washington State University. He’s also a snake expert.

Perry told me the difference between poison and venom. They’re both toxic mixes of mostly proteins. But they get into your body in different ways. Poison is eaten, breathed in or absorbed through the skin. Venom is injected through a bite or sting.

Animals protect themselves from their own venom in a few ways. First, they make and store it in special pouches. They’re called venom glands.

“When a venomous snake bites, muscles on the outside of the venom gland squeeze it. That injects venom into the prey through a channel in their fang,” Perry said. “The only opening is through the fang. So, you’re not going to release venom into the body where it could be harmful.” 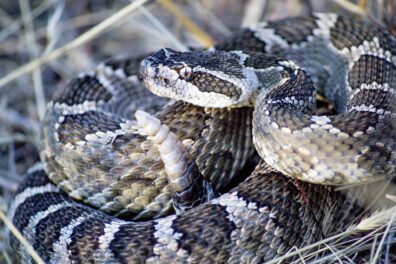 Another way they protect themselves is resistance. That means a toxin made by an animal isn’t likely to hurt them. Perry told me the way venom works is very specific. It’s like a key fitting into a lock.

Animals that make venom have evolved so their own venom “key” doesn’t fit into their locks. So, even if they accidentally bite or sting themselves, the venom doesn’t cause a reaction. Sometimes an animal’s immune system or special anti-venom proteins protect them, too.

But the system doesn’t work perfectly. Sometimes snakes who bite themselves do get sick and even die.

Other animals can become resistant, too. Perry told me that rattlesnakes use venom to catch tasty ground squirrels. Some rattlesnakes have stronger venom than others. Some squirrels can handle venom better than others. The venom key doesn’t fit as well into their locks. Those squirrels are more likely to survive. Then, they can pass on their resistance through their genes to their babies.

With all those resistant squirrels running around, snakes with stronger venom will probably catch more meals and live longer. They’re more likely to pass their genes on to their babies, too.

Over time, the animals adapt to each other—cranking out stronger and stronger venom or higher and higher resistance to survive. Scientists call this an evolutionary arms race.

An arms race is also the reason that some newts are so poisonous. Garter snakes are one of the few animals that can eat those newts. After eating a poisonous newt, these snakes are slow or unable to move for a while. But they don’t die. So, the newts make stronger poison to survive. That puts pressure on the snakes to become more resistant. That back and forth eventually led to today’s poisonous newt. Its poison is one of the strongest toxins on Earth.