I love curling up under a pile of blankets at bedtime and waking up refreshed in the morning. You might be surprised to hear that scientists aren’t sure why sleep makes us feel that way.

I talked about how sleep works with my friend Marcos Frank. He’s a brain scientist who works in the Sleep and Performance Research Center at Washington State University.

“Without sleep, we do poorly on a lot of tasks, and our brains and bodies don’t work as well,” Frank said. “But why is not entirely clear.”

Burning fuel to power the brain also produces leftover molecules. These can be unstable and harmful when they build up. Other waste products can build up in the brain, too—like proteins that don’t fold right and clump together.

So, the second idea is that sleep gives time for your brain’s “cleanup crew” to work. It’s possible that special cells in your brain clear out unstable molecules and other harmful waste while you snooze.

“We shouldn’t think of the brain as one simple cell type,” Frank said. “It’s full of all kinds of brain cells. It may not be that every cell requires sleep the same way. Maybe some cells need to be restored, and other parts of the brain need to be detoxified. We just don’t know yet.” 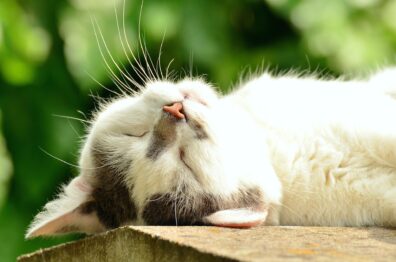 Have you ever tried to stay up all night? Eventually, your eyes get heavy, and you feel sluggish. Your warm, comfy bed calls to you.

Many biological drives are feedback loops. These are built-in cause-and-effect systems in your body. If you need more fuel, a feedback loop signals to crank up your hunger. Then, it signals again to dial down that hunger after you eat.

Figuring out how the sleep drive works could help us understand what sleep restores or cleans up. That’s one of the things Frank studies in his lab.

Another clue that sleep is important is the fact that most animals sleep or rest. Some animals even seem to have deep sleep like humans do. Scientists think this type of sleep may be important for brain development.

Frank has studied sleep in cuttlefish. Like squid and octopuses, they have cells in their skin that change color. When cuttlefish sleep, they nestle into the gravel and close their eyes. Sometimes their eyes and arms start twitching—like humans do during deep sleep. Sometimes they change color while they sleep. It looks like they could be dreaming!

Why we sleep is one of the big questions scientists are working to answer. With enough brain-boosting cat naps, maybe someday you’ll help solve the sleep mystery.