When you look up at the night sky, it can feel like the universe is a big blanket of stars above you. But unlike a blanket, the universe doesn’t have corners and edges. Far beyond what humans can see, the universe keeps going. As far as humans know, it never stops.

When I saw your question, I went straight to my friend Michael Allen to learn more. He is a Senior Instructor of Physics and Astronomy at Washington State University.

Allen explained that you can think of the universe kind of like a rubber band. If you look at a rubber band’s flat surface, you can see it has no beginning and no end. It keeps going around and around in a loop. 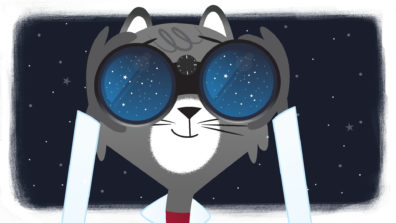 Imagine you drew dots on that rubber band. If you pull on the rubber band, what happens? The rubber band stretches, and the dots move further apart. The universe is like that. The distance between all its galaxies, planets, and stars is stretching all the time, like dots on a rubber band. It never ends, but it’s also constantly expanding.

Everything you see depends on light bouncing off objects. Light reflects off the things around you and your eye absorbs it. When you look at your hand, you see your hand in that exact moment.

Light moves very fast — about 186,000 miles per second — but the universe is very big. So the farthest edge of the observable universe is the oldest light we can see: about 13.8 billion years in the past.

No matter where you are, you can think of yourself as a time traveler of sorts. When you gaze up at the stars, you’re looking up at the past.