An octopus has three hearts and long arms with suction cups. It probably seems very different from you. But you have the main ingredients of octopus ink in your body, too!

I talked about octopus ink with my friend Gretchen Rollwagen-Bollens, associate professor in WSU’s School of the Environment. She told me that ink isn’t just an octopus thing. Most animals called cephalopods (sef-uh-luh-pods) make it. These include octopus, squid and cuttlefish.

Cephalopods including octopuses use color a lot. They have sacs of colored pigments all over their bodies. They use those sacs to change their body color. That helps them blend into their environment.

They also make and store a dark pigment in special ink sacs.

“Squid ink looks dark because it contains molecules of melanin, which is a pigment,” Rollwagen-Bollens said. “It’s the same pigment that you find in human skin. The more melanin skin cells contain, the darker they are.”

There’s also melanin in human hair and eyes. For octopuses, squid and cuttlefish, all that pigment usually makes their ink black. It can also look brown, grey, blue, or green. 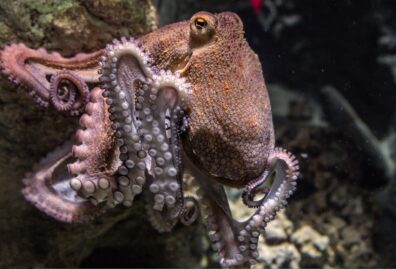 The second ingredient of ink is also familiar: mucus. Yep, that mucus. The slimy texture of mucus affects how the ink squirts out.

An octopus will eject ink when threatened. But there’s more than one way to do it. Sometimes they release ink in a puff. This ink has less mucus, so it spreads through the water quickly. The cloud of ink distracts enemies. Then, the octopus can escape.

Sometimes an octopus will squirt out ink with more mucus. That makes the ink thicker. It can look like long ropes. Some scientists think this ink looks like jellyfish tentacles. The octopus can hide behind the ink to escape.

Some octopuses, squids and cuttlefishes eject ink in thick spurts that look like their own body shapes. Then, they can dart away and leave the fake body behind to confuse their enemies. That fake-out is called a pseudomorph. 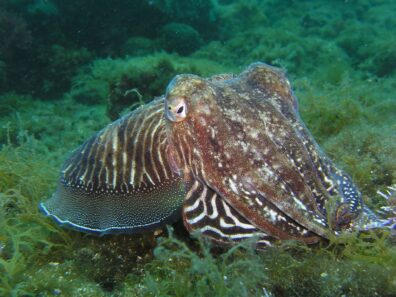 A few cephalopods go a step further. Their ink has a chemical that irritates an enemy’s eyes. It can also make it hard for them to smell. One deep sea squid even makes ink that glows!

Rollwagen-Bollens told me that ink helps them survive.

“That individual who’s able to use the ink to escape a predator one more time than some other guy will survive. Then they’ll have babies with that same trait,” she explained.

Releasing ink also helps other octopuses, squids or cuttlefish nearby. As the ink spreads through the water, it’s an alarm signal. It tells the others to swim away to safer waters.

Ejecting ink must be a good strategy. Cephalopods have been cruising around the oceans for about 500 million years. That’s a lot of ink!

P.S. To learn about a special (and adorable) squid that uses bacteria to light itself up, check out this video. If you watch closely, you can see the itty-bitty squid spew out ink twice.