Archaeologists exploring ancient Egyptian tombs sometimes find honey. It’s thousands of years old, but you could still safely spread it on your toast!

I talked to my friend Brandon Hopkins, professor in the WSU department of entomology, about why honey lasts so long. He told me honey is one of the only foods that never spoils.

Microbes are a big reason other foods go bad. These living things are so small you need a microscope to see them. They include bacteria and fungi like mold. Just like you, they love a good meal.

Some microbes break down food. That changes the way it looks, smells and tastes. Microbes can make food look moldy, mushy or slimy. It will smell and taste gross. So, what’s the difference between slimy, stinky food in the back of your fridge and ancient honey that’s still yummy?

The main difference is that honey doesn’t contain much water. Bees gather nectar from flowers to make honey. Nectar is very watery. In fact, it can be 70% water. Honey is about 18% water. Bees dry out the nectar by fanning their wings. This moves air over the nectar and causes water to evaporate. 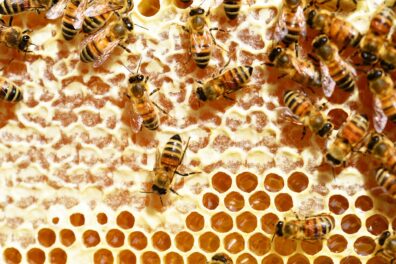 Hopkins told me that bees use their tongues and antennas to taste the nectar. The taste tells them when the honey is ready. Then, they cover the honey with wax to store it for winter.

Like all living things, microbes need water to survive. If they try to live in honey, there simply isn’t enough water to keep them alive.

Another thing that keeps away microbes is honey’s pH. The pH scale shows if something is an acid like vinegar, a base like soap or in between like water. Honey is an acid. That makes it an unpleasant or deadly place for most microbes to live.

In fact, honey is so good at keeping microbes away that it’s been used as medicine to treat wounds and prevent infections. Archaeologists have found ancient prescriptions for honey. They even found an 8,000-year-old stone painting of humans collecting honey.

Hopkins says you may notice crystals in your honey. This is normal and doesn’t mean the honey is bad. You can eat honey with crystals. Or you can gently warm the honey to melt the crystals and make it smooth again.