The universe is a big place. Thinking about how we fit into it is part of what makes humans (and cats like me) special.

I talked about your question with my friend Afshin Khan who studied astrobiology and environmental science at Washington State University. Astrobiologists explore how life began. They also look for signs of life outside Earth.

Khan told me your question is a huge mystery.

“We have very good ideas about what could have happened,” she said. “In different labs around the world, we’ve gotten very close to simulating some of those conditions. But simulations can only get so close to what was happening on early Earth.”

We have a good sense of when life started. We know Earth formed about 4.5 billion years ago. The oldest fossils on Earth are stromatolites, basically layers of rock and microbes. They’re at least 3.5 billion years old. So, there must have been living microbes on Earth at that time. 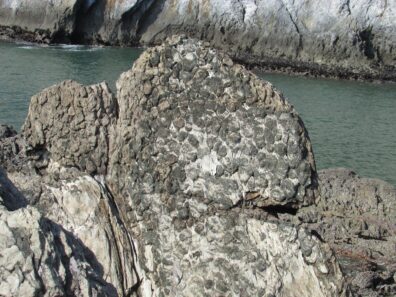 Living things need energy and water. They also need organic molecules. These molecules make up your cells. They drive the chemistry that happens inside your body. That chemistry is how your cells get oxygen. It’s how you change food into energy and move your muscles.

But how can those complex organic molecules develop from simple molecules and chemistry?

To figure that out, scientists made a glass device to mimic the super-hot conditions on early Earth. There were lots of gasses, water, and lightning. So, they put gasses and water into the glass device. They zapped it with electricity. After one week, the water turned brown. It was full of organic molecules and things that form them.

Scientists have done this experiment under many conditions. Khan even did it at WSU! One possibility is that the brown “soup” of organic molecules could have clumped together like bacteria do today. They could have started doing chemistry together. Or maybe built a protective layer around themselves like a cell membrane.

Khan also told me that hydrothermal vents may hold clues to how life started. These are hot springs on the floor of oceans or lakes. The water in these vents can reach 750 degrees F! There’s no sunlight down there, but lots of pressure and toxic minerals. It’s not a place you would expect to find life.

But scientists who discovered these vents in 1977 did find life there. Organisms that love extreme places are called extremophiles. Some extremophile microbes live in vents. They use the toxic chemicals to make energy—just like plants use the sun to make energy.

Khan told me that early Earth had hydrothermal vents, possibly perfect places for life to start. They have water and energy. They have lots of chemicals and chemistry going on. Scientists have shown that organic molecules and very simple cells can form there. 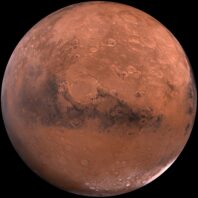 Another idea is that life didn’t begin on Earth at all.

“For all we know, we could discover we are actually Martians!” Khan said. “Maybe we evolved from life that came from Mars.”

Around the time Earth formed, there were lots of collisions in space. It’s possible a meteorite from Mars was thrown to Earth. Maybe the first cells or organic molecules hitched a ride. Earth might have been the perfect hot, watery, lightning-filled place for that “seed” of life to grow.

“We are made from the same elements the stars are made of,” Khan said. “We have become intelligent enough that we are on a quest to understand where we come from.”

We’ll probably never know for sure how life started on Earth. But thinking about it makes us good astrobiologists and even better caretakers of our planet and universe!